A service provider asked me to help him to design a backup service where the main topic was Microsoft 365.

I’m sure many of you already know and already use Veeam Backup for Office 365.

It is an excellent solution to address an end-user request and to allow a Service provider to supply a managed service.

But what about unmanaged service?

In other words: is it possible to give an admin of an organization a way to perform backup and restore by himself in a multi-tenant architecture?

The answer came from the great job of two Veeam guys.

Niels Engelen and Timothy De Win have developed a web portal leveraging the native VBO-365 RESTFul-API that allows the service provider to score the goal. The project is called MARTINI.

Just a note before starting: the articles have been written “for dummy”; the scope is explaining step by step the procedure I followed to implement the service.

The smallest architecture you can design is composed of one VBO-server and one Portal server.

In these articles the names of these 2 servers are in order:

A video that explains how to install VBO-365 software is available at the following link: Installing VBO365.

b) Command 3 installs the unzip package

It requires and automatically installs the following packages:

At the end of this setup the screen output shows the following output.

If the error shown in picture 1 appears it is necessary to follow the procedure described below:

the output is shown in picture 2 and it checks the plugin used for any MySQL users.

the output shown in picture 3 confirms it is correctly changed.

Now retype the previous command (mysql -u root -p) and please continue with the procedure if it still doesn’t work as shown in picture 4 :

at this point reboot the server.

The command mysql -u root -p  shows the following output:

Copyright (c) 2000, 2020, Oracle and/or its affiliates. All rights reserved.
Oracle is a registered trademark of Oracle Corporation and/or its
affiliates. Other names may be trademarks of their respective
owners.
Type ‘help;’ or ‘\h’ for help. Type ‘\c’ to clear the current input statement.

Let’s go back to martini checking if the database and the new user have been created with the command:

selecting no when the prompt asks if it is the first run and follow the easy wizard as shown in picture 5. 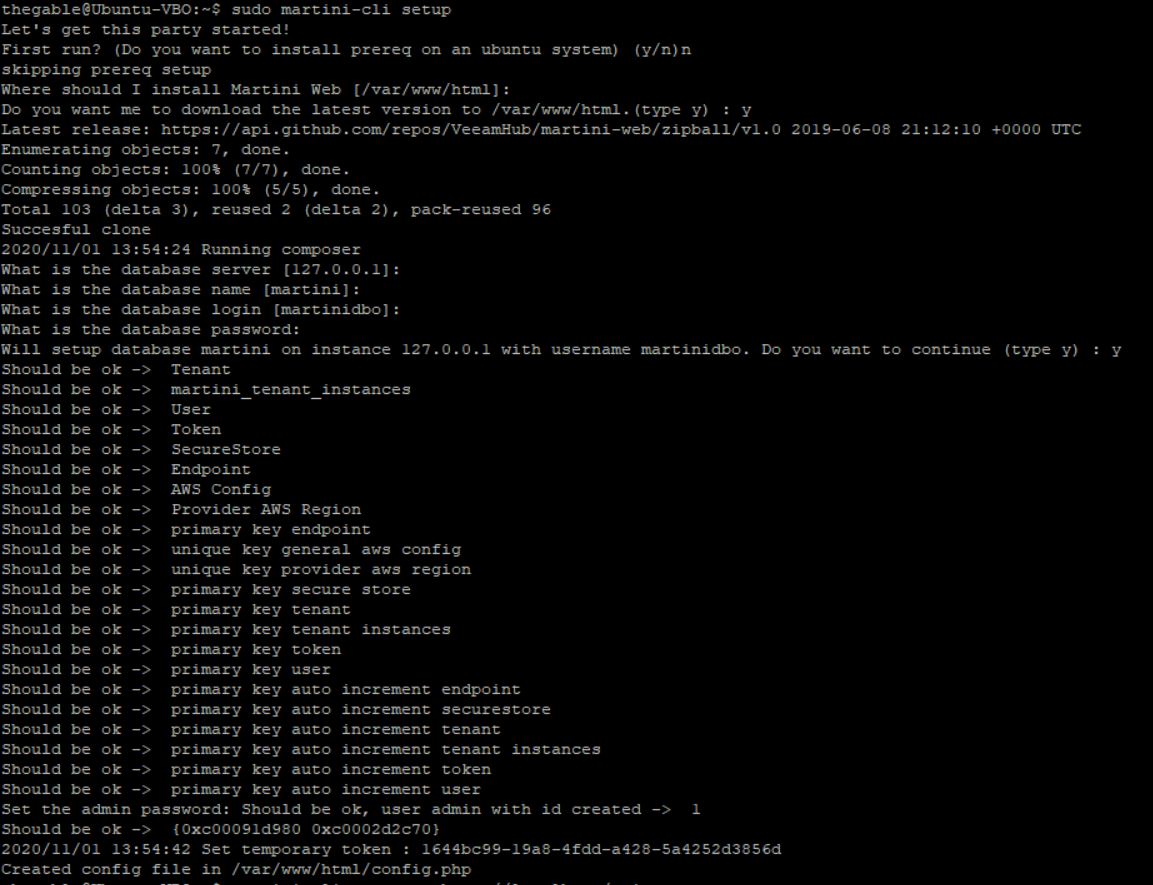 The last commands are:

Now open a web browser and point out to the VBO-portal server  IP address and you can see the login to Martini page.

In the next article, we are going to cover how to set it up and some useful detail to use it.

That’s all for now guys.