vLANs works by applying tags to network frames and handling these tags in networking systems.

I love how USG has faced up the vLAN challenge.

Their starting point is working with vLAN as if it were a layer 3 object and not layer 2 of the OSI model.

The idea behind USG is thinking vLAN is a new LAN with a different IP Address”.  Are you a little bit confused? Yes? I also was at the beginning but now I’m enthusiastic of this new approach.

Let’s explain better with an example directly from my Lab Network.

In my Environment I needed to create 2 vLAN. The first one to address the iSCSI protocol and the second to manage the Backup traffic.

I went directly to USG user interface and created the vLANs from Network menu  as shown in figure 1, 2 and 3

The next step is enabling routing between the new networks and the original  LAN.

The task is performing selecting Switch ports from Profiles Menu.

As shown on figure 4 I set up  an easy rule to let the networks talk to “each other”. In this case LAN to iSCSI as Figure 4

Now the last step. Enabling traffic from and to the Networks. In a simple word I worked at Firewall level.

I spent some hours to understand the options the USG can offer to their customers because it’s possible to set up many rules to manage traffic among LAN (LAN-IN and OUT), WAN (WAN-IN and OUT), GUEST (IN and OUT) and LOCAL (WAN/LAN/GUEST)

Really many many options but with a little patience, you can tune your networks answering to any security design.

In this example, I just created rules to manage the traffic LAN IN (FIGURE 5 and 6) 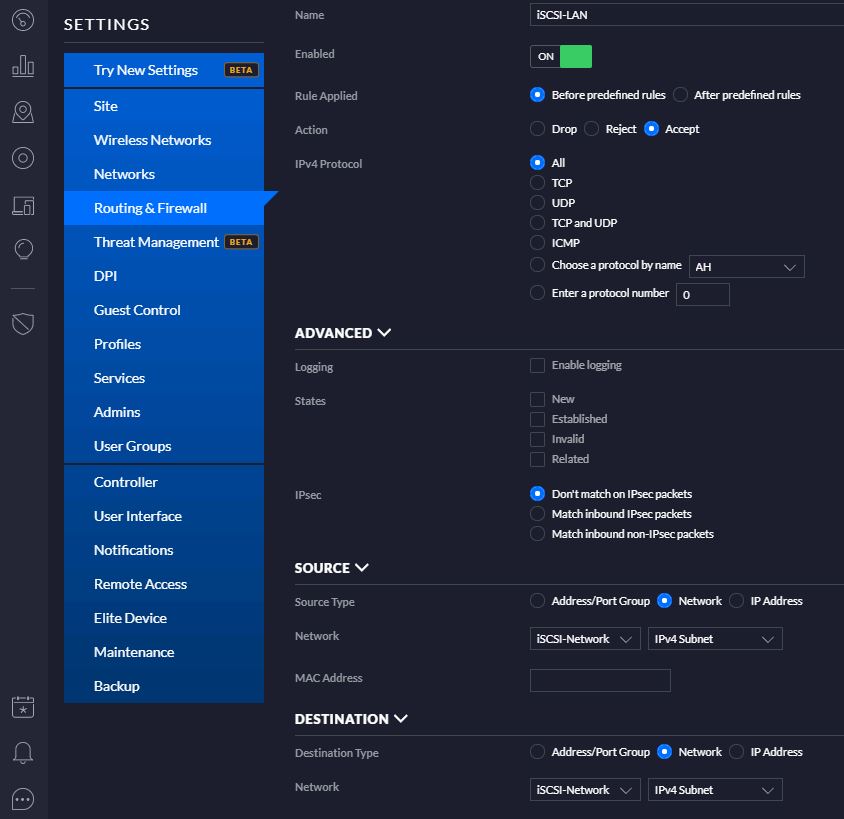 If you want to grant the Servers connected to LAN to surf on Internet,  you just  need to set up a LAN-IN and a LAN-OUT rule.